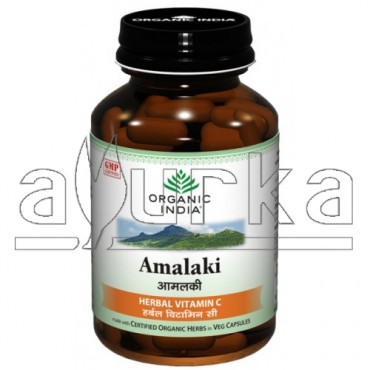 Amalaki, also known as Indian gooseberry, is an Ayurvedic Medicine that provides a rich source of natural Vitamin C and antioxidants. Vitamin C helps in detoxification and rejuvenation of the digestive system and antioxidants helps in reducing the free radicals.

Amalaki in Ayurveda is considered as a rasayana with restorative effect and is capable of balancing the 3 constitutional elements that govern human life i.e. Vat, Pit, and Kaph. Amalaki acts as a powerful anti-ageing and is useful as an antacid, cardiac tonic, aphrodisiac, antipyretic, antidiabetic, cerebral and gastrointestinal tonic. It improves eye sight, luster of skin & hair and stamina. It also acts as a mild laxative that soothes and cleanses the bowel.

Direction of Use: Take 1-2 Amalaki capsules two times a day with meals for three months or as directed by physician.

Packing: Amalaki from Organic India is available in a bottle pack of 60 capsules.

Continue
Tags: Fatigue, Immunity Booster
Disclaimer: Duration of treatment and onset of action with the medicines depends on various factors like severity & symptoms of disease, age & physical conditions of the patient etc. Please contact your Ayurvedic Physician for more information.